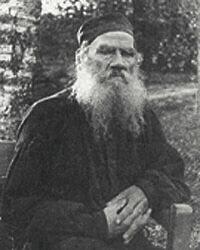 You are surprised that soldiers are taught that it is right to kill people in certain cases and in war, while in the books admitted to be holy by those who so teach, there is nothing such as a permission, but, on the contrary, not only is all murder forbidden but all insulting of others is forbidden also, and we are told not to do to others what we do not wish done to us. And you ask, is this not a fraud, committed for the sake of those accustomed to live on the sweat and blood of other men, and who have therefore perverted, and still pervert, Christ's teaching, which was given to man for his good, but which has now in its perverted form, become the chief source of human misery

The thing has come about this way :- The governments, and all those people of the upper classes that are near government, and live by the work of others, need some means of dominating the workers, and the means they find in their control of the army. Defence against foreign enemies is only is on it an excuse. The German government frightens its people about the Russians and the French, the French government frightens its people about the Germans, the Russian government frightens its people about the French and the Germans, and that is the way with all governments. But neither the Germans, nor the Russians, nor the French, desire to fight their neighbours and other people, but, living in peace, they dread war more than anything else in the world. The government and the upper governing classes, to excuse their domination of the labourers, behave like a gypsy who whips his horse before he turns a corner and then pretends he cannot hold it in. They provoke their own people and some foreign government, and then pretend that for the well-being or for the defence of their people they must declare war, which again brings profit only to generals, officers, functionaries, merchants, and, in general to the rich. In reality war is an inevitable result of the existence of armies are only needed by governments in order to dominate their own working-classes.

The thing is a crime, but the worst of it is that the government, in order to have a plausible basis for its domination of the people, has to pretend that it holds the highest religious teaching known to man (i.e. the Christian), and that it brings up its subjects in this teaching. That teaching, however, is in its nature opposed not only to murder, but to violence, and therefore, the governments, in order to dominate the people and to be considered Christian, had to pervert Christianity and to hide its true meaning from the people, and thus deprive men of the well-being Christ brought them. This perversion was accomplished long ago, in the time of that scoundrel the Emperor Constantine, who for doing it was enrolled among the saints. All subsequent governments, especially our Russian government, do their utmost to preserve this perverted understanding and not allow the people to see the real meaning of Christianity, because having seen the real meaning of Christianity, the people would perceive that the governments, with their taxes, soldiers, prisons, gallows and false priests, are not only the pillars of Christianity they profess to be, but are its greatest enemies.

......... Christ did not sanction murder, but taught kindness, meekness, forgiveness and love of one's enemies ......... the only means to free people from their many miseries lies in freeing them from the false faith instilled in them by government, and in their imbibing the true Christian teaching which is hidden by this false teaching. The true Christian teaching is very simple, clear, and obvious to all, as Christ said. But it is simple and accessible only when man is freed from that falsehood in which we were all educated, and which is passed off upon us as God's truth.

......... That teaching tells us nothing of the beginning, or the end, of the world, or about God and His purpose, or in general about things which we cannot, and need not know, but it speaks only of what man must do to save himself, i.e. how best to live the life he has come into, in this world, from birth to death. For this purpose it is only necessary to act to others as we wish them to act to us. In that is all the law and the prophets, as Christ said. And to act in that way we need neither icons, nor relics, nor church services, nor priests, nor catechisms, nor governments, but on the contrary we need perfect freedom from all that, for to do to others as we wish them to do to us is only possible when a man is free from the fables which the priest give out as the only truth, and is not bound by promises to act as other people may order. Only such a man will be capable of fulfilling - not his own will nor that of other men - but the will of God. And the will of God is not that we should fight and oppress the weak, but that we should acknowledge all men to be brothers and serve one another.