You are here: ZMPM Peace Magazine -> Issue Three -> the Dream

Gordon Brittas and the Dream

The strange story of Gordon Brittas, Whitbury Leisure Centre and "the Dream" 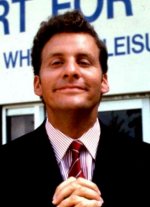 As I remarked to the National Press shortly after Whitbury Leisure Centre had been burnt to the ground, "Managing a Leisure Centre has to be one of the most satisfying jobs in the world. Its all I ever wanted to do. Help bring people together. It's my dream." Was it Martin Luther King who said, "All I have to do is dream"? How right he was , for an American. The kind of dream I want to talk about is the type of plan for the future which is a dream at the moment, but surely will become a reality before too long. Since my younger twin brother Horatio and I were young children, we have held on to our dream. Two young men, starting off in the world, one going to theological college, the other going to Loughborough College of Physical Education. They wrote down on a bit of paper what their aims in life were going to be. On my paper it says, "Working towards the dream" and it did on his too. We have simple aims, which can be summarised as follows:

These aims can be summarised in the simple phrase "Body and Soul". But they are fairly difficult tasks for just one man to cope with, so we agreed to share the work. I look after the physical side of our culture's development, while Horatio takes care of the spiritual side. Some of the aims fall in between the two, of course. Ending war, for example is both a physical and a spiritual task. It takes a certain amount of spiritual effort to persuade the leaders of the world that war is basically an incorrect policy, and Horatio's appointment as Dean of Beirut has certainly taken us forward in helping people understand the basic religious reasons why killing each other is a rather messy answer to our difficulties. But if people are not to go about killing each other any longer, what else is there for the young men of our world to do? This is where my job in charge of the physical side comes in. If we can provide constructive but still physically exhausting alternatives to mass killing and genocide, such as badminton competitions or free trampolining for the under-10s, then we can divert peoples' attention away from the need to machine gun those who don't necessarily agree with all our opinions. My goodness, if we all went around killing people we didn't like very much, there wouldn't be very many of you left alive, would there! Dreams can be dangerous. I sometimes think we'd be better off without them. But you've got to have a dream! If you don't have a dream, how you gonna make a dream come true?