You are here: ZMPM Peace Magazine -> Issue One -> Spotlight

EINSTEIN ON WAR AND PEACE. (Extracts) An historical address of Albert Einstein (1879 - 1955) sent to the World Peace Congress of Intellectuals in Wroclaw, Poland. August 1948. 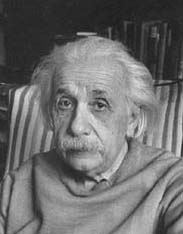 We meet today as intellectuals and scholars of many nationalities , with a deep and historic responsibility placed upon us. By painful experience we have learned that rational thinking does not suffice to solve the problems of our social life. Penetrating research and keen scientific work have often had tragic implications for mankind. On the one hand they produced inventions which liberated man from exhausting physical labour, making his life easier and richer, but on the other hand , they introduced a grave restlessness into his life, making him a slave to his own technological environment and, - most catastrophic of all - creating the means for his own destruction.

However poignant the tragedy is, it is perhaps even more tragic that, while mankind has produced many scholars so extremely successful in the field of science and technology, we have been so inefficient in finding adequate solutions to the political conflicts and economic tensions which beset us. Man has not succeeded in developing political and economic forms of organization which would guarantee the peaceful co-existence of the nations of the world. He has not succeeded in building the kind of system which would eliminate the possibility of war and banish forever the murderous instruments of mass destruction. We must build spiritual and scientific bridges linking the nations of the world. We must overcome the horrible obstacles of national frontiers. All too frequently conflicts among nations are still decided by resort to brute force, by war.

Throughout the ages this state of anarchy in international affairs has inflicted indescribable suffering and destruction upon mankind, again and again it has impeded the progress of men, their souls and their well-being. At given times it has almost annihilated whole areas. The desires of nations to be ever prepared for war has still other repercussions upon the lives of men. The power of every state over its citizens has grown steadily during the last few hundred years - no less in countries where the power of the state has been exercised wisely than in those where it has been used for brutal tyranny.

The technological developments of the last few years have created a completely new military situation. Horrible weapons have been invented, capable of destroying in a few seconds huge masses of human beings and tremendous areas. Since science has not yet found protection from these weapons, the modern state is no longer in a position to prepare adequately for the safety of its citizens.

Mankind can gain protection against the danger of the unimaginable destruction and wanton annihilation only if a supranational organization has alone the authority to produce or possess these weapons. It is unthinkable, however, that under existing conditions, nations would hand over such authority to a supranational organization, unless the organization had the legal right and duty to solve the kind of conflicts which in the past have led to war. Unfortunately, there are no indications that governments yet realize that the situation in which mankind finds itself makes the adoption of revolutionary measures a compelling necessity. We Must revolutionize our thinking, revolutionize our actions and must have the courage to revolutionize relations among the nations of the world. To bring this home to men all over the world is the most important and most fateful social task intellectuals have ever had to shoulder.