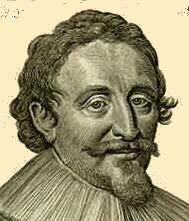 Hugo Grotius was born Huig de Groot in Delft, The Netherlands in 1583 and was considered a gifted child.

At the age of 11 years he entered the University of Leiden studying classics and philosophy graduating at the age of 14. He then traveled to france and obtained a Doctorate of Law from the University of Orleans and returned to Holland to work as an advocate in the Hague. Grotius was a gentle and moderate man who always strove for peace and unity among Christians. His interests extended to theology, poetry and history.

In 1604 he was asked by the Dutch East India Company to write a judicial treatise "on the law of prize and booty" which was published in 1609 (the Dutch at the time were a major trading nation). In it he defends the free access to the oceans for all nations, an idea subsequently taken up by many nations. In 1613 Grotius led an embassy to James the 1st of England - its purpose was the settlement of trade differences.

Involved in local politics, Grotius was arrested and imprisoned (1618) and forced to escape persecution. He traveled to Paris in 1621 and it was there that he wrote what became his most useful contribution to the development of International Law. He wrote a book (which became extremely popular on the Continent of Europe and among English speaking peoples) entitled "On the law of war and peace" (1625) which was the synthesis of past writers' views and contributions to a law for all "jus gentium" or International Law.

From this time onwards Grotius would be known as "Father of International Law". In his book he applies the doctrine of Natural Law to the conduct of Nations. Natural Law was a concept developed by the ancient Greeks and the Roman legal system. Human societies he advocated are a legal community and and governed by "jus gentium" (Law of people) which itself is based on "jus naturale" (Natural Law) common to all men and nations and based on reason. So states like individuals are are bound by a code of duties and prohibitions that are "universal, reasonable and unchangeable". One nation for example may not attack another. Grotius regarded certain wars or hostile actions as "Just" only if there was no tribunal authorised to settle a dispute (i.e. only if there was no established peaceful alternative).

Man as a social animal cannot avoid interaction with others and this necessitates the use of law for the mutual benefit of all concerned. The law should be commonly agreed and applied with full justice for all. Such is the doctrine of jus gentium - a law of people.

Since the time of Grotius International Law has grown with relentless progress but is still based upon Natural Law and is not enforced with any great sanction but relies on moral suasion to request National Governments to a change of policy. The universal citizen is under universal law (jus gentium) and universal law is for the benefit of all and based on natural law (jus naturale) so International Law is a law for Everyman and is established for the benefit of all.