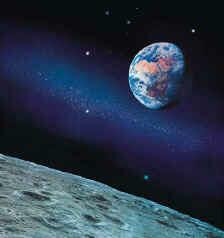 SAMMY SAYS... When I was young and adventurous I hitched a ride with an Apollo space mission that circled the Moon. When we had rounded the Moon I looked out of the window and saw the Earth, this marvelous blue orb - just floating in space. There was everything that I had been brought up to - the trees, the forests, the people ... everything - and there I was just watching. It was mind boggling

I had heard people talk about Spaceship Earth traveling through space and time, and there I was watching it. Quite a sight. THere it was in front of me, this wonderful world all together, the good and the bad, the saint and the sinner, what a picture! We took a photo so you can see it too. It's true, you know,a picture does paint a thousand words. It changed my point of view ... it really did. Then it was obvious, the World is One. No man is an island.

The first is in Apple and also in Pear
The second is in Desperate and also in Dare
My third is in Sparrow but also in Lark
My fourth is in Cashier and also in Clerk
My fifth is in Steven but also in Ten
My word is now complete, given as a gift unto Men
Website Design and SE Friendly Programming C and S Design