Barbara Ward 1945
Peace on Earth to Men of Goodwill 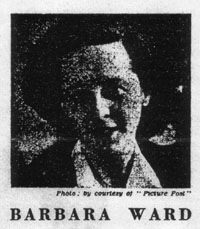 For the last two thousand years the world has heard the cry "Glory to God in the highest; on earth peace to men of goodwill." It has sounded more poignant and more urgent at the end of each great war. But it has been said so often that I doubt whether the words today have any real meaning . We shall say them this Christmas, but will they be any more than an empty formula?

"On earth, peace to men of goodwill" - this is not really a trite phrase. If you go back through history and think of the great leaders of mankind, the philosophers and the saints who have moulded civilisation. Buddha in India and the Far East, Lao-Tse in China, the Greek philosophers and supremely, in our own civilisation, Christ - you will find that they all had one great belief in common. It is that there are permanent and unchanging laws of right and wrong, of good and evil, which men will defy only at the price of suffering, strife and war. They all held that, just as there is a law of nature governing ordinary material things (for instance, water cannot flow uphill, or change its composition from H2O),so there is a law of nature governing the behaviour of man. "Thou shalt love thy neighbour as thyself," or "Thou shalt not steal," are as basic to human existence as the law of thermo-dynamics is to physics.

The great difference of course, between scientific laws governing lifeless matter and the natural law governing human beings is that men can break the moral laws which bind them. They have free will. They can choose evil even though it contradicts their whole being. But what happens in nature when you break a law? What happens , to give a simple example, if you violate the laws of good health and expose yourself to infection? Illness and disease follow as a consequence.

Please do not think that I am wandering away from the men of goodwill and the peace that shall be theirs. What the saints and the philosophers are always trying to tell us is that it is as fatal for human society to break its moral laws as it is to break physical laws. The consequences of selfishness, disloyalty or violence are as inevitable as the consequences of disease or earthquake. Civil strife, fighting, hatred and finally war do not just appear in society. They are thrown up by the behaviour of ordinary men and women in society and they will go on being thrown up just as long as men and women continue grossly to violate the natural laws of good and evil to which the conscience of mankind has always given witness. The cry "peace to men of goodwill" is not an empty formula . It has a terrible meaning, there will be peace only for men of goodwill. The men of evilwill must always and everywhere sow seeds of war by their egotism, their violence and their bad faith.

This fact ought to make us see peace as a far more challenging and arresting adventure than the mere end of fighting. We are beginning now in homes and towns and factories and councils of state to lead the lives which will lead to peace - or war. Everyone is involved, for who among us knows by what tiny spark of ill-will or evil-doing the great train of disaster may not be set alight? If our family lives are rancorous and unfaithful, if our social life is riddled with exploitation and mass unemployment, if international relations are full of festering nationalism and imperialist rivalry, we are already on our way to war. There will be no peace, for there is no goodwill.

So this Christmas should be a time of dedication - of each of us to be a builder, not a destroyer of peace. Each citizen by his personal and his social behaviour is paving a road - to war or peace. Peace will be built, like a coral reef, from the actions of an infinite number of men of goodwill so leading their lives that gradually their society becomes sane and sweet.

This peace is not only the work of great statesmen. It does not simply turn on the decisions of Potsdam or Yalta. The best terms fail if there are no men to fulfil them. The worst terms can be thwarted if men refuse to carry them out. We are all of us the raw material of peace. And peace will depend on our goodwill.