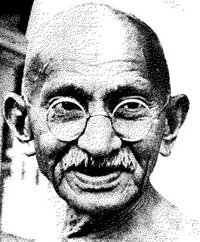 Mohandas Karamchand Gandhi was born in Portbandar, an Indian seaside town north of Bombay in 1869.
At 13 he was married to a girl of similar age (they had four children). At 18 he came to Britain to study law. After graduation he returned to India to work as a lawyer. In 1893 he took a job in South Africa where he experienced racial prejudice when he was ejected from a first-class railway compartment because a white man objected to him being there, (even though Gandhi had a valid 1st class ticket). In 1904 Gandhi set up Phoenix farm, outside Johannesburg, a community where he started to practice simple community living (continued with Tolstoy farm, 5 years later).

A personal religious quest moved Gandhi from interest in Christianity (particularly impressed by the ideas in The Sermon on the Mount) to Theosophy and back to Hindu religious texts (The Bhagavad Gita, well studied). Gandhi's unique views held that ethical principles and effective action require that civil resisters accept full responsibility for their acts, extend respect for adversaries, retain an open mind towards opposing positions and seek creative solutions acceptable to all sides in conflict. To describe the new and evolving technique he coined the word "Satyagraha" (satya = truth, graha = strength/truth force). Satyagraha was not simply a strategy for opposing evil without using violence; it was a whole way of reconstructing society, using love and striving for truth.
Gandhi said "To me, Truth is God and there is no way to find truth except the way of non-violence". Violence separates people, but the search for truth is a communal enterprise in which we have to work together. Satyagraha uses non-violence to make ones opponent face up to the fact of injustice or exploitation.
However while satyagraha use various non violent methods to confront or persuade an opponent methods like sit-downs and sit-ins, strikes, fasts, demonstrations, boycotts, picketing and non-co-operation (all of which Gandhi used), they should also be doing constructive work to improve the situation. Every time Gandhi started a campaign against some injustice, he also started constructive schemes to improve conditions. Perhaps the final words should be left to Mahatma Gandhi - "non-violence and truth are inseparable and presuppose one another."

"There is no god higher than truth".