In Flanders fields the poppies blow
Between the crosses, row on row,
That mark our place; and in the sky,
The larks still bravely singing, fly.
Scarce heard amid the guns below,
We are the dead, short days ago,
We lived, felt dawn, saw sunset glow,
Loved and were loved, and now we lie,
In Flanders fields.

"Follow me men and I will show you your future" 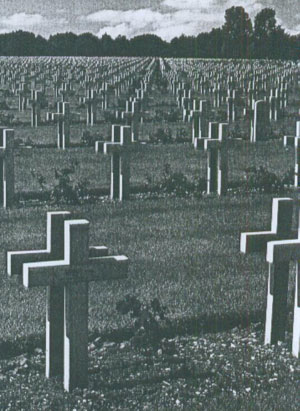 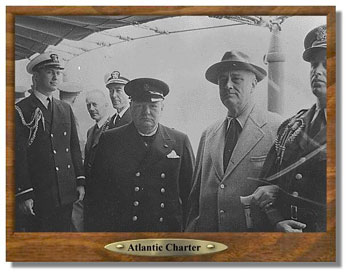 A joint declaration of the President of the United States of America and the Prime Minister, Mr Churchill, representing His Majesty's Government in the United Kingdom, being met together, deem it right to make known certain common principles in the national policies of their respective countries on which they base their hopes for a better future for the world.

First, their countries seek no aggrandisement, territorial or other;

Second, they desire to see no territorial changes that do not accord with the freely expressed wishes of the peoples concerned;

Third, they respect the right of all peoples to choose the form of government under which they will live; and they wish to see sovereign rights and self-government restored to those who have been forcibly deprived of them;

Fourth, they will endeavour, with due respect for their existing obligations, to further the enjoyment by all states, great or small, victor or vanquished, of access, on equal terms, to the trade and to the raw materials of the world which are needed for their economic prosperity;

Fifth, they desire to bring about the fulles collaboration between all nations in the economic field with the object of securing, for all, improved labor standards, economic advancement and social security;

Sixth, after the final destruction of the Nazi tyranny, they hope to establish a peace which will afford to all nations the means of dwelling in safety within their own boundaries, and which will afford assurance that all the men in all the lands may live out their lives in freedom from fear and want;

Seventh, such peace should enable all men to traverse the high seas and oceans without hindrance;

Eighth, they believe that all nations of the world, for realistic as well as spiritual reasons, must come to the abandonment of the use of force. Since no future peace can be maintained if land, sea or air armaments continue to be employed by nations which threaten, or may threaten, aggression outside of their frontiers, they believe, pending the establishment of a wider and permanent system of general security, that the disarmament of such nations is essential. They will likewise aid and encourage all other practicable measures which lighten for peace-loving peoples the crushing burden of armaments.

A colossal German gun today shelled Paris from a distance of over 75 Miles. Total casualties since it began firing in March are about 1,000 people. French morale has suffered a heavy blow.

The gun has a barrel 110 feet long; it fires its shells 12 miles in the air where there is little drag from the atmosphere. At such a great range "Big Bertha" (as it has been nicknamed) is highly inaccurate, but Paris is too big a target to miss.