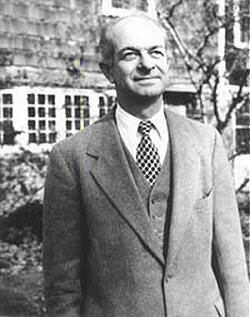 We of the mid-twentieth century live in a most extraordinary time. We are living through that unique epoch in the history of civilisation when war will cease to be the means of settling great world problems.
We shall soon enter upon the continuing period of peace, a period when there will be no more war, when disputes between nations will be settled by the application of man's power of reason, by International law.

It is the development of great nuclear weapons that requires that war be given up for all time.
The forces that can destroy the world must not be used. The development of these great weapons took place only a short while ago only half a decade ago there occurred the second terrifying metamorphosis, that from the giant of the kiloton nuclear bomb to the megaton monster.

We have had only a few years to contemplate the nature of life in a world of H-bombs and superbombs. The facts about these bombs and the predictions about the nature of nuclear war have become known to the public only recently, and often they have been released in a protecting cloud of reassuring verbiage. But now the facts are at hand, and we can see for ourselves that our own future and he future of the human race depend upon our willingness and ability to co-operate, to work together in a world wide attack on the great world problems.