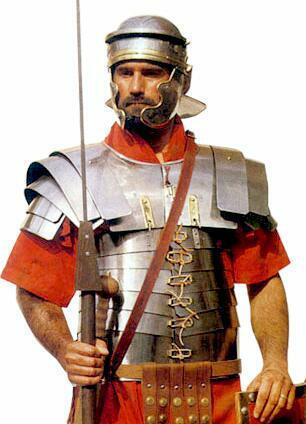 For the Roman victor the spoils and the "Triumph". No country in the world honours its successful generals like Rome. The "Triumph" is the pinnacle of every officer's ambition. To achieve it, his army must have killed at least 5,000 men in battle.

On the morning of the celebration, The General will parade his troops and present them with their share of the spoils. Then he will march at the head of his army with magistrates, senators, musicians, slaves and eminent captives along a time-honoured route through the Forum to the Temple of Jupiter where sacrifices take place.
Like the statute of Jupiter, his face will be painted red, he will be dressed in lavish gold and purple robes, and paintings of his achievements will be carried aloft together with booty he has brought back to Rome.

The victor is "for the day" - although he is accompanied by a slave who whispers to him continually: "Remember thou art mortal". A bell and a whip are also tied to the chariot as reminders that Rome can still punish him.
At the height of the celebration, the loser - a defeated enemyGeneral is put to death in a prison cell below the Capitol.

The Easter weekend has seen an extraordinary protest against Britain's nuclear bomb programme.
Supporters of the recently established CND (Campaign for Nuclear Disarmament) walked from London all the way to Aldermaston, the Berkshire site of Britain's Atomic Weapons Research establishment where nuclear warheads are made.
About 3,000 men, women, and children are estimated to have taken part in the ban the bomb march, and a further 9,000 turned up for the rally outside the main gate of the high security defence plant.

You do not know who appears before you today to speak. I am a representative of the original American race, the first people of this continent.
We are good and not bad.... We have given you nearly all our lands, and if we had any more land to give we would be very glad to give it. We have nothing more.

We are driven into a very little land, and we want you now, as our dear friends, to help us with the government of the United States. I only want to do that, which is peaceful and the Great Fathers know it, and also the Great Father who made us both.

I came to Washington to see the Great Father in order to have peace and in order to have peace continue. This is all we want, and that is the reason why we are here now...Look at me. I am poor and naked, but I am The Chief of the Nation.
We do not want riches, we do not ask for riches, but we want our children properly trained and brought up. We look to you for your sympathy. Our riches will... do us no good; we cannot take away into the other world anything we have - we want to have love and peace....

We would like to know why commissioners are sent out there to do nothing but rob us and get the riches of this world away from us?

Berlin radio said on Saturday that the bodies of 50 British sailors had been washed ashore on the Channel Islands in the past few days. They were believed to have been killed, when, the British cruiser Charybdis and a torpedo-boat were sunk west of the Channel Islands on the night of October 22nd-23rd.
"They were buried with full military honours in cemeteries on Guernsey and Jersey" the report said.