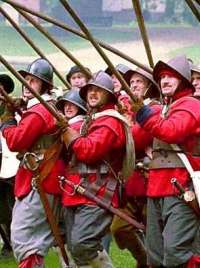 Three successive salvos crashed out from 70 cannons on the walls of Munster today to announce that peace has come to a war ravage Europe after 30 years of bitter conflict in which almost every power became involved both on land and sea.

It has taken three years of negotiation in two cities, Munster and Osnabruck, to bring about the signing of the Treaty of Westphalia. With Swedish troops fighting in Prague where the war started with a Protestant rebellion against the Catholic Habsburg empire and the French army winning a succession of victories in Bavaria, Ferdinand 3rd, the emperor was forced to accede.

The treaty represents failure by the Habsburgs to turn Germany into Catholic Monarchy. It guarantees the full sovereignty of the German states and toleration for all three faiths, Catholicism, Lutheranism, and Calvinism, except in the hereditary lands of the Habsburgs. By the terms of the treaty, the Habsburg recognise the independence of the United providence's of the Netherlands from Spain.

France has acquired Alsace and the other territories as reparation; Sweden has secured Pomerania giving her dominance in the Baltic. But now, even as the last shots are being fired in Bohemia, Europe is counting the dreadful cost of the Thirty Years war - whole towns have been razed by siege and fire, some losing as many as 50 per cent of their population from plague borne by countries armies.

Over 100,000 mercenary soldiers have to be paid and returned home lest they turn themselves into robber-bands adding even more torment to a war-weary Europe.

The high cost of war is certain to cause massive tax demands on both nobles and peasants who are already threatening revolt. It is peace, certainly, but an uneasy peace that reigns in Europe.

Three centuries after the Black Death decimated the population of Europe, many countries find themselves in crisis once more.

The last century saw a satisfying upturn in the birth rate, with most populations easily making up for the losses of that disastrous era, but now for many nations the best that can be hoped is to resist a decline.

Growth is out of the question. Europe remains vulnerable to a triple threat: war, plague and famine.

Some countries, such as England, have remained relatively unscathed. Others, such as Spain and the German states, have been devastated. This century has seen some of the worst plague attacks since the 14th century.

The Thirty Years War was a major factor in the near destruction of much of the continent. Apart from battlefield deaths, the constant manoeuvring helped to spread disease and laid waste to vast tracts of farmland. Crops have been destroyed, and famine is on the increase.
In a grim irony, Europe has passed on its problems to the New World, which it is exploiting, with 95 per cent of the native people killed off by plague.