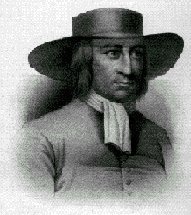 George Fox was born in Drayton-in-the-Clay (now called Fenny Drayton), Leicestershire in 1624. His parents were moderately well to do (his father was a weaver) and they apprenticed him to a shoemaker who also dealt in wool and cattle. At the age of 19 he left work and home and embarked upon his own quest for truth. He wandered through the countryside seeking answers to the spiritual doubts and questionings that beset him. After a personal revelation on Pendle Hill, Lancashire (at age 23) he embarked upon his life's work as an evangelist.

His personal experience convinced him that individuals were capable of a direct awareness of God. (The Inner Light). God came not through churches, sacraments and outward forms but directly and personally. This revelation of divine truth through the "inner light" was the centre of his later teachings.

Each person is a carrier of the divine spark and personal morality must reflect this fact. He therefore believed in - Equality; non-violence; brotherhood; justice;education; personal responsibility and integrity; compassion for all and the power of silence (Divine Communication). Both the Church of England and the Puritans of Cromwell's time opposed Fox's teachings and persecuted him and his followers. He was imprisoned 9 times between 1649 and 1675. On one occasion in a prison at Launceston, he was held in a room into which his jailers dumped human excrement.

The Quaker leader was ahead of his times in his practices and beliefs on many social issues. He wrote and spoke against slavery after his visit to America. He began to call for prison reform soon after his own imprisonment. His opposition to war and violence was declared early in his ministry. These views were embraced by his followers (The Quakers today are staunch pacifists).

He applied his beliefs in the equality of all in the sight of God to women as well as men. His views on equality often led to trouble with the authorities, but it also was the basis of the Quaker treatment of the American Indians as brothers (notably in the Quaker colony of Pennsylvania) N.B. - William Penn, the founder of Pennsylvania was a follower of George Fox.