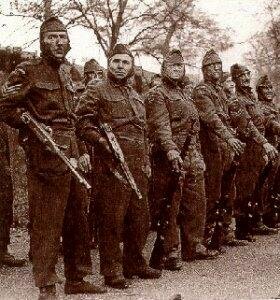 Today the new Local Defence Volunteers,originally armed with little more than armbands and hastily devised weapons, have been renamed - at Winston Churchill's suggestion - the Home Guard.

It was in May, when the Germans were advancing into France, that the War Minister, Anthony Eden, called for men "not presently engaged in military service between the ages of 17 and 65 to come forward and offer their services to make assurance doubly sure ...."

Within a week, 250,000 men had enrolled. Many of them were veterans of the Great War, keen to "do their bit". Their initial antics - with aged rifles, shotguns, cutlasses borrowed from museums and converted into pikes with carving knives - were greeted with tolerant smiles. It was the first citizens' army since Napoleon threatened invasion in 1803.

One platoon used 48 Lee Enfield rifles, formerly used in a Drury Lane patriotic tableau, another, in Lancashire, was armed with six foot spears. Ingenious weapons were devised, such as catapults to throw "petrol bombs", and piano wire stretched across lanes to decapitate motorcyclists.

The first LDV units were very democratic, electing their leaders, senior officers stood shoulder to shoulder with former privates, and two bishops were among the first to enrol, but with the introduction of uniforms and real weapons, military discipline became the norm.

Today the Home Guard is proving itself daily to be more and more effective - guarding key installation, releasing regular units for more essential duties and showing the value of "local knowledge" in manoeuvres.

The last full-scale cavalry charge took during the Second World War. In November 1941 a division of Mongolian Cavalry thundered across No Man's Land towards a German infantry division dug in near Muscino, a village not far from Moscow. The attack was a disaster. About 2000 Russians died in the charge and not a single German.

Income tax is up by 40%, there is a new War Profits Tax, customs duties are raised by 50% on tea, tobacco and many other goods and the half penny post is abolished. With these and many other tough measures Reginald McKenna, Chancellor of the Exchequer in the new Coalition Government, today introduced the biggest ever budget in the nation's history. He told MPs "These are unprecedented burdens but I know the taxpayer is determined to see the war through."