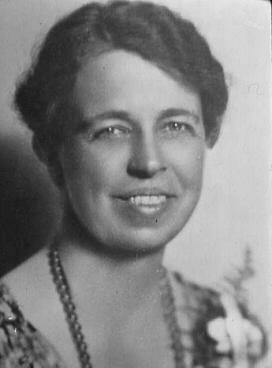 Eleanor was born in New York, USA and was the niece of Theodore Roosevelt (Ex President). Her father was an alcoholic and Eleanor had an unhappy childhood with both her mother and her father dying early in her life.
She was sent by her grandmother to school in England. Soon after her return to America she married Franklin D. Roosevelt her cousin (1905), a budding politician.
She had six children, by him, one of whom died in infancy.

Eleanor was put upon her own resources after Franklin had an affair outside their marriage. Franklin was struck by polio (1921) which left him disabled. Franklin had been in the senate since 1911. Eleanor kept their marriage going and became her husbands "eyes and ears". Together the Roosevelts progressed in politics and in 1928 Franklin became Governor of New York and later President (1932).

Eleanor then spent 12 active years as the First Lady (The Presidents Wife). After Franklin's death in 1944 Eleanor embarked upon 17 more years of Notable public service. She was appointed US Delegate to the newly created United Nations (served 1945-51). In 1946 she was elected "Chair" position of the UN's Human Rights Commission and in 1948 she was instrumental in helping to draft The Universal Declaration of Human Rights.

Eleanor had set her own agenda since 1921 and she was active in many fields including - journalism (she wrote her own syndicated newspaper column regularly for many years); Author - she wrote a number of books including " The moral basis for Democracy" 1940; Civil Rights, including the rights of racial minorities and labor rights; Education, she taught History and Government in a college she part owned; She was also a Humanitarian and Traveller.

Eleanor was welcomed far and wide as a stateswoman and humanitarian. She met most of theworld leaders of her day and she was widely acknowledged to be the worlds most admired woman. She also was liked and admired by the common people, who responded warmly to her genuine compassionate interest in their welfare.

On her 77th birthday she is recorded as saying - "I suppose I should slow down" ...... she died the next year.