Liberation is release - release from the cycle of birth and death from the foibles of mankind and the sufferings of matter.
The immortal soul prompts man to education: towards perfection. Such perfection is beyond the range of one life-time. Eventually the soul through the realization of its true nature (after much struggle) is liberated.
Liberation therefore is the removal of ignorance by knowledge. Thou art that.

WOMEN'S ENCAMPMENT FOR A FUTURE OF PEACE AND JUSTICE 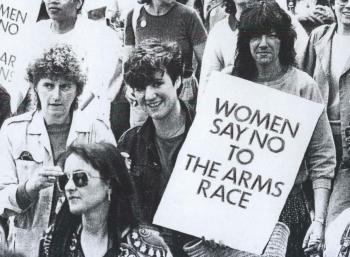 the eternal feminine
draws us ever upward and on

The existence of nuclear weapons is killing us. Their production contaminates our environment, destroys our natural resources, and depletes our human energy and creativity.

But, the most critical danger they represent is to life itself. Sickness, accidents, genetic damage and death, these are the real products of the nuclear arms race. We say no to the threat of global holocaust, no to the arms race, no to death. We say yes to a world where people, animals, plants and the earth itself are respected and valued. 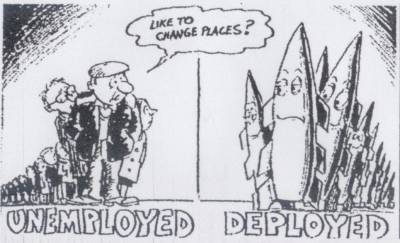