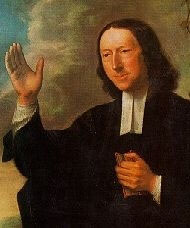 John Wesley was born in Epworth, Lincolnshire in 1703, he was one of 19 children. His parents belonged to the Church of England (his father was a pastor), yet they came from non-conformists families who put a focus on a direct personal relationship with God. His mother Susannah Wesley brought up her children to delight in intellectual attainments and in "in the nurture and admonition of the Lord".

In 1709, John (then aged 6) narrowly escaped death in a family house fire. From that moment onwards, in his mother's eyes, John was marked as a man of destiny.

John attended Oxford University in 1720 and there he (and his brother Charles) established "The Holy Club" - a club committed to study, devotion and practical good works. Regular features of the holy club were, regular hours of prayer, scripture readings, and conversations on religious topics. They would deny themselves amusements and put their time and money into catering to "the needs of the poor", they also preached in prisons, conducted school for poor children and visited the sick, and by such practices gained the nickname of Methodists.

John was ordained a priest in 1728 and became a missionary in Georgia, N. America from 1735-1738. He was influenced by The Moravians (a German Protestant church). He was also influenced by George Whitefield to open-air preaching, which he was successful at.

Returning to England in 1738, John had a transformative experience on 24th May 1738 in Aldergate St., London that gave John a personal faith of God that led him on to his destiny. Thereafter his doubts and inner conflicts gave way to invincible confidence with which he preached the Gospel. Over the rest of his life he traveled widely and delivered some 40,000 sermons, often as many as 4 in a day, telling of salvation by personal faith and practical good works. It is estimated that he traveled some 225,000 miles (at a time when traveling was fraught with difficulties) most of them on horseback.
His last words (1791) summed up a lifetime of evangelical piety, preaching and toil "best of all, God is with us". John Wesley's philosophy can be explained in his view that "Do all the good you can, in all the ways you can, in all the places you can, at all the times you can, to all the people you can, as long as every you can".