German bombers, sent by Hitler to help Franco's Fascist forces against the Republicans, destroyed the Basque town of Guernica yesterday in one of the most horrific military actions since the 1914-18 war. Thousands of innocent civilians perished. 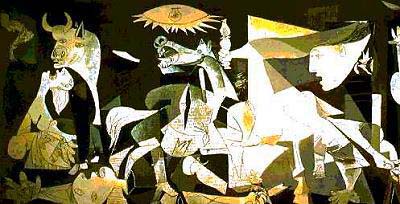 It was market day in Guernica, and the square was crowded with shoppers when a squadron of Heinkel 1-11 and Junker 52 bombers, escorted by fighter-planes appeared and jettisoned high explosives on the town. Incendiary bombs then set it on fire, while the fighters machine-gunned survivors. Noel Monks, a British reporter, arrived soon after the bombing and helped collect burned bodies. He described the scene: "Some of the soldiers were sobbing like children. There were flames and smoke and grit, and the smell of burning human flesh was nauseating.

Houses were collapsing into the inferno. In the Plaza, surrounded almost by a wall of fire, were about 100 refugees. They were weeping and wailing and rocking to and fro. It was impossible to go down many of the streets, because they were walls of flame. Debris was piled high. I could see shadowy forms, some large, some just ashes. I moved round to the back of the Plaza among survivors. They had the same story to tell, aeroplanes, bullets, bombs, fire."

Guernica was a communications centre, with a munitions factory. But the bombing was random.

British Army surgeon Major-General James Barry could not take his most closely guarded secret with him when he died today in the London suburb of Kensal Green. Conclusive evidence that the slightly built five foot tall septuagenarian officer was not what he seemed presented itself to the woman who laid out the body. James Barry had been Miranda Stuart.
Barry, an orphan, went into the army after gaining an MD from Edinburgh College. In South Africa, the West Indies and Crimea, Barry built up a reputation as a first-class surgeon and an able administrator, and ended a distinguished career in the office of Inspector General of all British hospitals in Canada. Described as a "perfect gentleman" with an eye for ladies, he had a long-standing affair with a Mrs Fenton. No one knows if he shared his secret with her.


May I, as a sister of one of the shot Stalag prisoners, express my gratitude for the inspiring memorial service at St. Martins-in-the-Fields? The hymm &quoteI Vow to thee, my country", was fittingly chosen as the last. We who are left behind must rededicate ourselves wholly to seeing that war shall never again blight civilsation. - The causes of war are fundamentally in human nature; wanting our own way, jealousy, greed, lust, domination, softness, complacency, pride. And if a lasting peace is to be made we must recognise and fight these war making causes in ourselves first.
Unless "I pay the price" (as the hymn says) in daily battling against these things in
myself, then the cause for which my brother and his companions paid the price will remain unfulfilled and I shall have let them down.