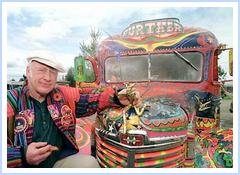 "Everybody needs dreams" - In the everyday sense a visionary is one who 'sees' the future possibilities and potentialities. One who sees in his or her head (the minds eye) a future reality they would like to realise. (examples: Henry Ford/the motor car, Walt Disney/cartoons).


In the spiritual or religious sense, a visionary is one who can see mankind's divinity (usually by revelation) and one who leads the way for others to follow. Examples: Jesus, Buddha, Mohammed.

Visionaries are seen in retrospect as pioneers.